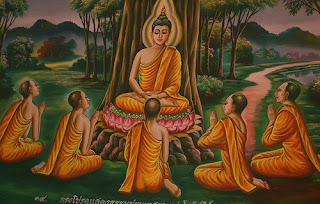 The Sangha, traditionally speaking, has two connotations; firstly, it refers to the two orders of monks and nuns, originally founded at the onset of Buddhist history, and, secondly, it makes reference to those men & women that have achieved awakening or enlightenment. It is this latter group that are included in the Triple Gem of the Buddha, the Dharma, and the Sangha, which every Buddhist takes refuge in as a source of inspiration upon the Path. In more modern times, the term Sangha has been extended to include non-celibate priests, as are found in Japanese Buddhism, and even to the whole Buddhist community at large, including lay people, as often happens in the Western Buddhism. In more traditionally-minded Buddhist societies, this latter meaning of Sangha is unrecognized, and only an ordained priest, monk, or nun is recognized as a member of the Order.

For the author, having taken refuge in the Forest Buddhism of Ajahns Chah & Sumedho, and living in conservative , using the word Sangha to include myself and other lay Buddhists seems inappropriate and potentially misleading. Describing myself as a member of a Buddhist Sangha feels akin to claiming to be enlightened or to being a monk (imitating a monk is a criminal offence in Thailand). But is it all that important in reality? Perhaps this is another example of clinging to the form and not the essence of the spiritual life that is being pointed to. 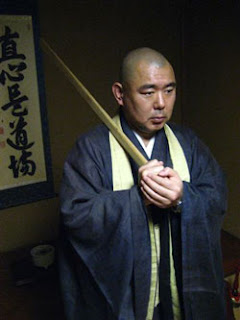 A Zen priest ready to whack the Sangha!

In truth, Sangha is another word and concept. We can use it effectively to encapsulate some abstract idea, or we can attach to the meaning we give to it, creating suffering around it. Even reflecting on the usage of Sangha to indicate the community of enlightened ones can lead to the realization that the mind is creating duality between enlightened and not enlightened, Sangha member and non-member. Sometimes, perhaps always, it can be useful to get back to basics so as to see things with a little more clarity. So, let’s get simple! 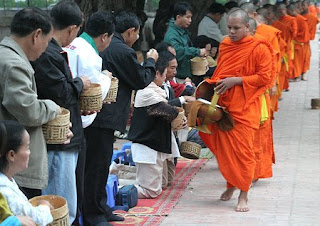 Traditional relationship between Sangha & the laity

Sit comfortably with eyes shut, perhaps in your meditation position, and, after settling down through an exercise such as watching the breath, mentally say the word ‘Sangha.’ Listen to its sounds: s-a-ng-gh-a. What reaction occurs in the mind to these sounds? Repeat the word slowly several times, and notice the space that precedes and follows each word. How does experiencing the word in this silent context affect the mind’s response to it? Now say the word internally and focus on the various connotations that arise in relation to it. What images come to mind; monks, nuns, robes, bowls, meditators, a chanting congregation, a gentle smile? Break the word into two syllables, and silently recite ‘sang’ on the in-breath, then internally say ‘gha’ on the out-breath. As the air gently sweeps into your body and then out again, see how any controversy or confusion associated with the word itself disperses into the softness of your breathing. How do you feel about the word ‘Sangha’ now? 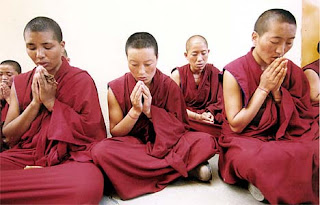 What of yourself, dear reader? Are you a member of a Sangha, or the supporter of one? Does it concern you that if you use the term Sangha to mean one thing, and Asian Buddhists use it to mean something quite different, misunderstandings can arise, and the suspicion that Westerners are yet again taking another cultural tradition and bastardizing it to suit themselves? Is the distinction between renunciate and lay person an important one in the Buddhism that you practice, or do you think that such categories are no longer relevant to modern Buddhism? 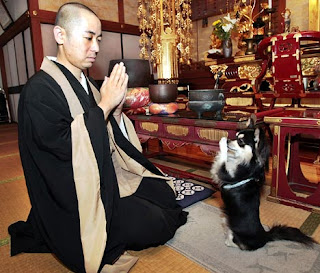 Is any collection of Buddhists a Sangha these days?

Gary, In my experience, "sangha" refers to everyone and everything I encounter.

This may not be traditional (in Thailand, at least) but I don't care about tradition or modernity. The only thing that's important for me is to wake up from delusion and suffering that I produce, and to help others do that same.

In my life, sangha plays an critical role in that awakening, and it's not limited to monks, nuns, and those already enlightened. The barista can help me awaken, just as fully as the Zen master.

As you say, "sangha" is another word and concept. Why then would we attach to it?

Seriously, your point that everyone & everything are constantly pointing out our true nature is an important one, Barry. Recognizing this can indeed lead to enlightening experiences that release us from our conceptual prisons.

On a conventional level, that is when wishing to communicate with others, words need to be accurate descriptions of actual things or processes, otherwise sensible communication becomes impossible.

On the level of awakening, it's fine to describe everything as 'Sangha,' just as it's fine to say black is white and up is down - in the awakened state we see beyond logical meaning. But, if wishing to talk of the Triple Gem in unenlightened circles, do we not need words that have limited, precise meanings that we all understand & share? Otherwise, it is like the blind leading the blind, and none of us are in the (Enlightened) Sangha, merely playing with words.

Having written that, it must be acknowledged that attaching to the literal meaning of words as absolute truths is equally misguided, if we wish to awaken to the way-things-are (the Dharma). Finding the Middle Way, where words have definite meanings on the conventional level, but can be transformed on the level of awakening seems to be the wiser course of action. What do you think, Barry?

Be well in the Sangha,
G.

Thanks for your generous response, Gary.

Buddha was talking (as I understand it) about the temptations of conceptualization.

And those temptations apply to conceptualizatons about sangha as much as to those about "me" and "you." So I tend to work lightly with any conceptualizations, especially in "teaching" contexts.

And I need to do this, because I have a strong tendency toward black/white thinking - exactly the kind of disease that the Buddha cautioned against.

On the conventional level I guess I hold sort of a bastardized western definition of Sangha as a group of like minded individuals practicing Dhamma together. I don't come across many Buddhists here in the "Bible Belt" region of the states, so most of my communications with other Buddhists is done through the internet. I've never met most of these people in person but I also consider them to be Sangha.

That being said, I do definitely appreciate the fact that I have a Theravada forest monastery just a few hours drive away. The formal Sangha system created by the Buddha creates an environment where the practice can reach much deeper levels more quickly than I could ever hope to achieve living the lay life. I don’t care what anyone says, it’s hard to sit in meditation for a few hours a day when you have a spouse and young children! It’s a huge benefit to have this formal Sangha I can visit every once in a while to renew the momentum of my practice and find guidance from forest monks who truly know the Dhamma.

I'm sure the internal qualities of refuge in Buddha, Dhamma, and Sangha are elaborated by many teachers, but I've always found the way that Ajahn Chah's linage teaches this reflection to be very useful. Ajahn Amaro explains that Sangha can be experienced as harmony and peace with the conditioned world. When the Buddha sees the Dhamma the result is Sangha. When the pure awakened knowing recognizes nature as it is there is peace and communion with the world. At least that’s how I remember he taught it. This Sangha is the real refuge.

As an irascible conservative in all aspects of my life I do not recognize "Sangha" as anything other then those monks(and the ancient nuns) who have been traditionally ordained, although I don't crtiticize others for using other definitions.

I'm a traditionalist in most things so naturally I wouldn't dare consider a layman such as myself as being part of the Sangha although I aspire to be a member of the Ariyas through my practice.

If others wish to consider themselves a part of the "Sangha" then so be it; I try not to get involved with the politics of Buddhist groups since I pretty much keep to myself.

Gary, it frankly doesn't bother me that the term is used so loosely these days. I know its origin and I know its formal meaning, but I've been with a little sitting group for fifteen years and we call ourselves a "sangha"--with a little "s"!--even though we are not monks and nuns, nor intend to be. The distinguished Thanissaro Bhikkhu, abbott of the nearby Metta Forest monastery, has been coming once a month for years and has never expressed dismay at our abuse of the term. Purists may scoff, but I love what our use of the word describes: a small and loving community of well-intentioned people who come together to practice meditation. That's enough, no?

Barry, I too have a tendency to see things as black or white - it's a common aspect of the human mind, perhaps especially the western mind! I recall D.T. Suzuki's statement: "Zen is gray."

Mike, I love your Ajahn Amaro representation of 'Sangha' as meaning being in harmony with the conditioned world. Great!

Justin, how did I know your response would be the most conservative?! (Just kidding!) I share both your traditional way of seeing the word 'Sangha', and your non-judgmental approach to those who use it differently. Well written!

It is enough, Peter, really. In fact, if I recall correctly, the word 'Sangha' literally means 'community', so to use it in the way that you cite seems most appropriate.

Excellent responses from all of you guys: thanks!
G

I think it means the traditional Sangha of monks but also another circle that extents further out to take in all Buddhists.

And then another circle going further and further out to incorporate all beings. Perhaps it's a bit like circles within circles that all touch at a certain angle in the loop.

And then perhaps once we transcend labels and shapes--ALL is sangha.

I like your description of the word 'Sangha', James. It pretty much sums up the way the comments have developed from the original article.

"ALL is Sangha" reminds me of a talk by Ajahn Chah, when he described the Buddha, the Dharma, and the Sangha in the same way. You're in exalted company, James!