Listening to the Void #1 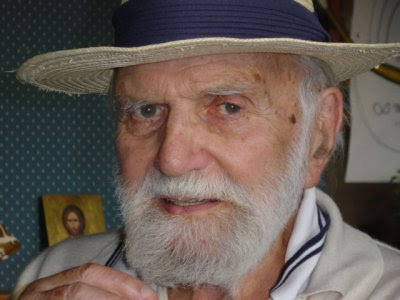 Douglas Harding - "Hear who you really are!"

“All conditioned phenomena
Are like dreams, illusions, bubbles, shadows,
Like dew drops and a lightning flash:
Contemplate them thus.”
(The Buddha, in the Diamond Sutra)

Alongside the brilliant Buddhist monks such as Ajahn Chah and Master Hua, there is another teacher that will appear on these pages from time to time. Although not a monk, nor indeed a Buddhist as such, this man had something very important to share with all enquiring Buddhists, not to mention anyone else for that matter. His name was Douglas Edison Harding, an English philosopher, author, and workshop leader that spent the last three decades of his life dedicated to sharing what he called “seeing who we really are”. He will be referred to herein as DEH.

The workshops led by DEH were mainly geared towards seeing our innate unborn reality using experiments based on the visual sense. Hence, the emphasis given to seeing who we really are. But, as DEH admitted himself, any method that reveals a universal truth cannot be dependent on only one sense, for then it wouldn’t be a universal truth, merely a partial one. With this in mind, DEH did develop a few other experiments that related to other senses, including the mind. For now, however, we will focus on another of the physical senses; hearing. Here is an experiment in awareness developed by DEH:

Closing your eyes, listen intently to any sounds that are arising in this present moment. Notice the particular qualities of each sound: their pitch, length, volume, rhythm, etc. Dwell for a short time on each individual noise, taking the time to recognize its characteristics. Next, turn attention around to listen to the listener. Can any such qualities be associated with that which takes in all these various sounds? Or is it the case that whilst the things heard have a range of particulars that mark them out, the listener is without any such characteristics. Here, there is no pitch, no length, no volume, and no rhythm etc. Here, is a silence alive with the sounds that it hears, but which itself is devoid of any such marks. Those things arise in an alert no-thing that is spacious awareness.

Sitting at my desk now, I can hear the fan humming behind me, the subsequent wind blowing in my ears, the tick-tock of the clock, my wife ironing in the next room, and the tapping noise as I type on the keys on my notebook. All these sounds are arising in what can only be described as no sound at all. Rather, it is the very absence of sound that allows them to be heard, just as it is the absence of vision that allows sights to be seen, and the absence of thinking that allows thought to be known, etc. On presence evidence, as DEH so often pointed out during his long and productive life, all phenomena can be heard, seen, thought, etc. as occurring in the unknown knower.

This unknown knower is the one unchanging factor in our ever-changing identities. It is without form, whereas everything else that we experience as being either self or not self is delineated by its very form. It is timeless, whereas everything else that we experience is governed by time, growing older by the second until finally dying. That tick-tock of the cosmic clock finds no one here to call time on, if the evidence is examined carefully. And this relates fundamentally to the question put to us by DEH: what use is a life if it is lived without ever looking to see who’s actually living it?

The Buddha taught that all created things – and this includes bodies and minds – are impermanent, unsatisfactory, and not-self. That things are impermanent is self-evident, in that we can observe how they decay and eventually die away. Sounds can be observed in this light too, as they arise, exist, and then cease. Everything is unsatisfactory in that it cannot satisfy us forever. Eventually, anything will come to bore us, disgust us or simply cease to satisfy us. Even those things we presently enjoy will become abhorrent to us if we have too much of them for too long. Imagine listening to your favorite song for a thousand years – you’d be sick of it after a thousand minutes! As to being not-self, can we control our bodies not to age, not become sick and not to (at some point) die? And anyone who’s meditated will know how the mind thinks what it thinks despite the will’s best efforts to control it. Both body and mind do not truly belong to the self: they are on loan from nature, and will go their own natural way in time.

The Buddhadharma also points to the void, the emptiness that is at the heart of all phenomena. Beyond all the myriad things that go to make up a living being, there is that indefinable no-thing that is neither impermanent nor unsatisfactory; indeed it is the absence of self that reveals what some – including DEH & many Buddhists – have deemed our true Self. Here, we begin to fall into the nebulous region of defining that which is devoid of characteristics. A hopeless task if there ever was one. Self, no-self, void, God, Tao, Zen, emptiness, Brahman, Mind, Buddha Nature – the words will always fall short of the reality, for the reality is beyond the grasp of the mind and its concepts. Talking of words, here’s another experiment to test out true nature in this moment:

Close your eyes. Say a word, any word will do, but let’s take the word ‘Buddha’ as an example. Speaking out aloud, ‘Buddha’, notice the various qualities of the word and the voice pronouncing it. Repeat this several times, each time focusing on the nature of the word and your voice. Now say the word again, but this time listen to that which is aware of ‘Buddha’. Is that which listens made of two syllables like the word it is conscious of, or is it empty of such qualities? Repeating the word again, can the listener said to be of such and such duration or consisting of particular sounds like ‘Buddha’? Take some time over this, becoming aware of that which is spoken and that which is listening.

DEH was keen for those that did his experiments to find out the answers to this research for themselves, and I’m not about to tell you how it is for you. In truth, how could I, for I can only really know the truth as it’s presented here, where I am. You, on the other hand, can see the way things are right where you are; it is up to each and every one of us to ascertain whether the sounds that we make and those that are around us are part of a real, enduring self, or as quoted from the Diamond Sutra at the top of this article, are as “dreams, illusions, bubbles, shadows, like dew drops and a lightning flash”.

Returning to this moment, the sound of a Thai soap opera can now be heard: not the most edifying of sounds! And yet, if the silence that is ever-present in the present is attended to, even the cackles and screams of demented soap characters can be easily tolerated as ephemeral phenomena in the void. There’s a saying in modern parlance which goes, “It ain’t over until the fat lady sings”, and yet even she, as a being made of various aggregate parts, is bound to become forever silent. And if you listen to her warbling, you can also hear that very same silence which is located in the one place we would normally never think of looking: right here.

Hope you are doing well lately!

It is very interesting to see your new blog. It is rare to see someone with such insight into multiple forms of buddhism, you convey things so well. You are trully a great teacher. I have learned much from both you blogs.

I must say I myself have never given much ear to mahayana buddhism, however i found this Douglas article to be quite intriguing indeed. I will have to find out more about his work.

Well wonderful really! I am leaving for Thailand in December for ordaination. Im very excited. I hope to meet you one day in Thailand. Ill be at WPN for quite some time i hope. Only thing im nervous about is getting to WPN from bangkok. hope i dont get lost :-)

look forward to hearingfrom you,

Good to hear from you. I'm doing fine, thanks. And thanks for the compliments, too! In truth, of course, it's great teachers like Ajahn Chah, Master Hua & the like that have inspired the two blogs, so I extend your kind sentiments to include them.

As to the work of Douglas Harding, check out the link to 'the Headless Way' website on the right bar of 'Buddha Space'. It's run by one of his most dedicated pupils, Richard Lang, and is full of fascinating stuff pointing to the Void & its contents.

Good to read that things are going well with you & that you'll be coming this way to practice the Way later this year. I'm sure we'll meet up, Craig. Traveling from Bangkok to Ubon isn't too much of a hardship as there are direct buses and trains from the capital to Ubon City.

Be well in the Dharma,
G.