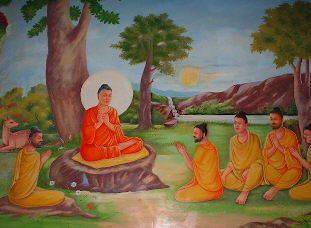 The Buddha delivers his first sermon

On the full moon of July Buddhists across the world celebrate Asalha Puja, or Dharma Day, commemorating the occasion of the Lord Buddha’s first Dharma discourse called the Dhammacakkappavattana Sutta, or ‘The Setting in Motion of the Wheel of Dharma Discourse’. This discourse followed the Buddha’s Enlightenment, and was given to five ascetics that were former disciples of the Blessed One. Upon hearing this teaching, one of the five ascetics called Kondanna had his spiritual eye opened, and became the first disciple of the Buddha to enter the Noble Path of Awakening. In recognition of this realization, his name was changed to Annata-Kondanna: ‘Kondanna-That-Knows (the Dharma)’.

So, what exactly was the Dharma taught by the Buddha on this full moon day in ancient India that led the ascetic Kondanna to see life in a radically different manner to before? As it exists today, the sermon is a brief but systematic description of the very heart of the Buddhadharma. To begin with, the Buddha talked of the between the two extremes of self-asceticism and self-indulgence, describing it as the Noble Eightfold Path:

“And what is this ?
It is the Noble Eightfold Path, that is to say:
Right View, Right Intention, Right Speech, Right Action, Right Livelihood, Right Effort, Right Mindfulness, and Right Concentration. This is the discovered by the Tathagata, which gives vision, gives knowledge, and leads to peace, to direct knowledge, to enlightenment, to Nirvana.” (Samyutta Nikaya 56:11, Pali Tripitaka)

The Buddha’s description of the Path begins with Right View for a good reason, for it is with Right View that the can be first tread upon, used as a guide to one’s practice. Put simply, Right View is seeing the world from the viewpoint realized by the Awakened One himself – the Buddha – and living one’s life from this new vision. Right View is summed up in the famous teaching of the Four Noble Truths, which are as follows:

The Path that leads to the ending of suffering is in fact the Noble Eightfold Path itself, so the Four Noble Truths contain the Path and vise versa, which a neat interdependence of the two aspects of Right View. Many people think that the Truths are negative with their focus on suffering, but Buddhists would respond that in the spirit of mindfulness – one of the eight aspects of the Path – recognizing the universal nature of suffering is simply seeing things as they really are, rather than through the rose-tinted glasses of naïve optimism. In any case, taken as a whole, the Four Noble Truths lead to the ending of suffering, so in fact they are a positive in that they point out the Way to the true happiness of Enlightenment.

Of course, the Buddhadharma is a highly-evolved set of teachings that include much, much more than the and the Four Noble Truths, and in this light a broader perspective than the Buddha’s first sermon will reveal much. To start with, the Buddha followed the Dhammacakkappavattana Sutta with the Anattalakkhana Sutta (‘the Characteristics of Not Self Discourse’). It is this teaching that led Annata-Kondanna and his four companions to become fully-fledged enlightened beings, after which they became the first five monks in the Buddhist tradition. The Anattalakkhana Sutta centers on the realization that all of the five aggregates that we usually take to be our self are in fact empty of any such self. The five aggregates are:

Here, the Buddha taught that all five aggregates are not self in that they cannot be made to be the way we might like them to be; they belong to nature, not us. Also, the Blessed One revealed that they are not self because they lead to suffering, and are impermanent. He taught that every one of the aggregates, whether internal or external, coarse or fine, inferior or superior, far or near, should be understood with Right View as “This is not mine, this is not what I am, this is not my self.” (Samyutta Nikaya 22:59, Pali Tripitaka)

Letting go of the delusion of selfhood is what the exists for. Through developing the eight aspects of the Path we can transcend the delusion that each one of us is a self consisting of the five aggregates and identifying with one or more of those aggregates as being our core self. The body, for example, despite our earnest wishes gets sick and old; eventually falling apart either gradually prior to death or somewhat more swiftly following the grim reaper’s call. This holds true for the mind too, as feelings constantly change according to the stimuli present and our preferences. Feelings are fleeting things, never staying around for long morphing into something else usually without our consent or knowledge. Perceptions, formations, and even consciousness itself can all be seen to come and go of their own accord and rarely at our behest. They are expressions of nature, and as such do not make up a permanent, separate individual self.

Getting to the heart of the matter, as one might expect from its title, the Heart Sutra describes much the same teaching as contained in the Anattalakkhana Sutta, with an emphasis on the fact that all phenomena are empty of substance or self. An extremely popular and influential yet brief teaching from the Chinese Tripitaka and the Tibetan one, it has inspired countless East Asian Buddhists to reflect on the true nature of things as no thing at all. It does so in a style very different to the more systematic and logical language of the Pali Tripitaka:

All things are without self: they are empty. In this way, they are emptiness, and emptiness is also all things or selves. This understanding of emptiness is applied to all five aggregates of being, revealing the self-idea as a folly based on identifying with one or more of the aggregates as comprising a self, rather than recognizing that in fact they are empty of any such thing. Such threads of teaching run throughout the Buddhist scriptures, transcending differences of time, culture and place. Whether it is the Buddha’s first sermon or whether it’s a much later Sutra, the core of the teachings are derived from the Dharma itself, reflecting its brilliant light across the world. Here’s an extract from one of those later Sutras, which continues the themes found in the above examples:

Then Mahamati to the Blessed One, “Why is it that the ignorant are given to discrimination and the wise are not?”

The Blessed one replied, “It is because the ignorant cling to names, signs and ideas; as their minds move along these channels they feed on multiplicities of objects and fall into the notion of ego-soul and what belongs to it; they make discriminations of good and bad among appearances and cling to the agreeable. As they cling thus, there is reversion to ignorance and karma born of greed, hatred and delusion is accumulated. As the accumulation of karma goes on they become imprisoned in a cocoon of discrimination and are thenceforth unable to free themselves from the round of birth and death.”
(Chapter One, the Lankavatara Sutra, the Chinese Tripitaka)

Again, in this teaching there is much to found in common with the basic teachings found in the Dhammacakkappavattana Sutta. When referring to “names, signs and ideas” leading to “the notion of ego-soul”, this Sutra echoes the Buddha’s teachings on the five aggregates, once more drawing our attention to the fact that our apparent selves are in reality composite of various parts, and when this self-centered view is let go of, the light of Nirvana shines through the illusion of self. Wisdom is here represented as the non-discrimination between this and that, between you and me, between self and not-self; without clinging and the desire that causes it, there is no ego-soul left to suffer.

The Dharma is an amazing gift that the Buddha and his successors have left to the world. It illumines the darkest aspects of our lives with the wisdom that can help us to free ourselves of the attachment to the idea of self that blights human existence. Dharma Day is great opportunity to reflect on this wondrous gift and how best we can respond to it, not just today but over the coming years of our lives. For, without the Buddhadharma where would we be? We’d be caught in the trap of delusion, being born life to life without any idea how to escape this suffering existence. Homage to the Dharma!

I really enjoyed your Asalha Puja post. You did a nice job of explaining the Four Noble Truths, the Khandas etc. while tying together different teachings from the Suttas/Sutras that hinge on the not self teaching.

The whole idea of not self is still pretty radical to this day isn't it? The notion that there isn't anything we can grasp and call me or mine is disorienting at first but liberating upon further reflection.

To think that over 2500 or more years ago the current Buddha set the Wheel in motion that still rolls along today is pretty amazing. Who would have thought that all the effort the Buddha put into perfecting himself and revealing his teachings would still be valid tody?

The wheel rolls on and now I would venture to guess that the Dhamma is practiced on every continent except Antarctica. Who knows, maybe some research scientist down there is meditating on "Buddho" as I write this. At any rate, thanks for a very nice reflection. I wish you, your readers and your family well this Asalha Puja.

Nice thought about 'Buddho' being recited down there near the South Pole, Justin!

The seed that grew into the amazing tree that is the Buddhadharma as we know it today was the Buddha's compassion, wasn't it? For, without this compassion for the suffering of all beings, he would never have been moved to share the Dharma with the five ascetics at the Deer Park, and there would have been no Sangha to teach the Dharma all these centuries. This is a lesson to us all, that wisdom without compassion is a dry fruit that bears no seeds!

And thank you Born for the Sadhus!

May we all thrive in the sunlight of the Dharma!
G