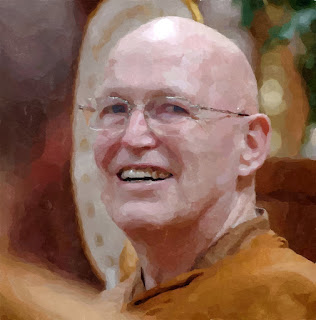 Ajahn Sumedho: Without any real core or essence

We’ll sacrifice our life for an illusion, to try to protect our identities, our positions, our territories. We’re very territorial. We think this England here belongs to the English. When we take that apart, does this plot of land here say it’s England? When I do jongrom (walking meditation) outside, does the earth come up and say, “You’re walking on me — England.” It’s never said that, never! But I say I’m walking here in England. I’m the one who’s calling it England, and that is an identity, a conventional identity. We all agree to call this plot of land here ‘England’, but it’s not really that; it is what it is. Yet we’ll fight, torture and commit the most atrocious acts over territory, quibbling about just one inch of property on a border. The land doesn’t belong to anybody; even if I own land legally — “This belongs to Ajahn Sumedho” — it doesn’t really; that’s just a convention.

When we bind ourselves to these conventions and these illusions, then of course we’re troubled because these are so unstable and not in line with Dharma. We end up wasting our lives around trying to increase this sense of identification, the sense of, “It’s mine, it belongs to me and I want to protect it. I want to hand it down to future generations.” On and on like this, into future lives and the generations that follow. We create a whole realm of illusion, personality and identity with the perceptions that we create in our minds, which arise and cease, which have no real core to them, no essence.

We can be very threatened when these illusions are threatened. I remember first questioning the reality of my personality. It scared me to death. When I started questioning, even though I didn’t have particularly over-confident, high self-esteem (I have never been prone towards seeing myself in megalomaniac perceptions; usually the opposite, very self-critical), even then, I felt very threatened when that security, that confidence in being this screwed-up personality was being threatened. There is a sense of stability even with people who are identified with illnesses or negative things, like alcoholics. Being identified with some sort of mental disease like paranoia, schizophrenia or whatever gives us a sense that we know what we are and we can justify the way that we are. We can say, “I can’t help the way I am. I’m a schizophrenic.” That gives us a sense of allowing us to be a certain way. It may be a sense of confidence or stability in the fact that our identities are labelled and we all agree to look at each other in this way, with this label, with this perception.

So you realise the kind of courage it takes to question, to allow the illusory world that we have created to fall apart, such as with a nervous breakdown, where the world falls apart. When the security that is offered, the safety and confidence that we gain from that illusion starts cracking and falling apart, it’s very frightening. Yet within us there’s something that guides us through it. What brings us into this monastic life? It’s some intuitive sense, a sense behind the sense, an intelligence behind all the knowledge and the cleverness of our minds. Yet we can’t claim it on a personal level. We always have to let go of the personal perceptions, because as soon as we claim them, we’re creating another illusion again. Instead of claiming, identifying or attaching, we begin to realise or recognise the way it is. This is the practice of awareness (sati-sampajanna), paying attention. In other words, it’s going to the centre point, to the Buddho (the one who knows) position. This Buddha image in the temple: it’s the still point. If you look at this Buddha-rupa, it’s a symbol, an image representing the human form at the still point.

(Ajahn Sumedho is the senior monk of the Western Forest Sangha, as well as former abbot of Wat Nanachat in Thailand & Amaravati Buddhist Monastery in England. His teachings are highly regarded across the globe. In the above talk, I have replaced the Pali word Dhamma with the more widely known Sanskrit term Dharma, both meaning 'Buddhist teachings' & 'the truth of the way things are.')
Posted by G at 12:00 AM

i don't mean to be rude mr. brahma but it sounds like you are overthinking a lot of things which is simply nothing but an unfortunately worded question?

Hello, Odin. Who's Mr. Brahma? What is the unfortunately worded question to which you refer?