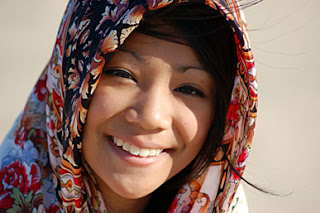 Is there a division between this Muslim's face & you?

There is a trend in Buddhism these days which not only goes against the spirit of the Buddha's teaching, but also against Buddhist rules. This is illustrated by the recent convention in Burma held by leading Buddhist monks there, in which various measures intended at reducing tensions between the majority Buddhist population of Burma and the minority Muslim community were discussed. “We hold this meeting with the intention of protecting our Buddhist race and our religion, and also to have peace and harmony in our community,” said U Dhammapiya, a senior monk and a spokesman for the convention. At first glance, this may seem a reasonable statement, but if we examine it a little more wisely, it reveals some disturbing ideas not in line with the Buddha's teachings.

Firstly, the monk refers to "our Buddhist race." This is a common attitude amongst those whose cultures have adopted Buddhism over long periods of time, but is it really a Buddhist one? Look at the wording carefully - presumably the monks did so before voicing it in public: "Our" suggests a division between 'us' and 'them.' In addition, the usage of the term 'Buddhist' in relation to race suggests that there is such a thing as racial Buddhists, whatever that might be. But being Buddhist is not a matter of birth, but of choice, or intent. We can't be born 'Buddhist' as to be Buddhist is to consider the Buddha's teachings and put them into practice. What newborn child is capable of that?!

Let's return to this attitude of 'us and them.' Does this fit in with Buddhist ideas or not? In a word, no. Buddhism is not a label or racial attribute that we can identify with, but a set of teachings & techniques to realize our true nature. Anyone can become Buddhist, whether they are born into a traditionally 'Buddhist' society or not - this author is an example of this. The Buddha did not teach us to view ourselves as a separate community to others, cutting ourselves off from them, or thinking ourselves special in some way. As Buddhists, our duty is live in peace & friendship with all people, whether Buddhist, Muslim, Christian, Hindu, atheist, or whatever. This brings us to another disquieting announcement by the monks - to introduce a law banning marriages between Muslim men and Buddhist women.

U Wirathu, a well-known nationalist monk, said he was delighted with the plans to try to stop any Buddhist woman from marrying a Muslim man. “I have dreamed of this law for a long time. It is important to have this law to protect our Buddhist women’s freedom,” he said during a press conference. What about a woman's freedom to marry who she wishes - Buddhist, Muslim or otherwise?! The proposed law would require any Buddhist woman seeking to marry a Muslim man to first gain permission from her parents and local government officials. It also requires any Muslim man who marries a Buddhist woman to convert to Buddhism. It is based on similar laws in Singapore & Malaysia, which the Burmese monks say have helped to establish inter-communal harmony in those countries.

However, the right to marry whoever one wishes is enshrined in the Universal Declaration of Human Rights Article 16, which states that “Men and women of full age, without any limitation due to race, nationality or religion, have the right to marry and to found a family.” Surely making inter faith marriages impossible between Buddhists & Muslims is not going to do anything positive in the relations between the two religious groups. In fact, it runs the risk of driving the two groups further apart. This appears to be part of a wider campaign by U Wirathu who leads the controversial 969 campaign that is being implemented all over Burma. It encourages Buddhists not to do business with Muslims and only support fellow Buddhists’ shops. How can this bring longterm inter-communal peace?

Another important issue here is that Buddhist monks in the Theravada tradition - to which U Wirathu & his colleagues belong - are proscribed from involving themselves in politics & law-making in the the rules for monks. Furthermore, the Buddha instructed monks to desist from even discussing politics, reflecting on the Buddhist teachings instead. By involving themselves in such issues, these monks are actually breaking their own monastic code of conduct, and ceae to be worthy of alms - nor should Buddhist laypeople listen to their views on such subjects, as by doing so, they also risk losing sight of the Buddha's true teachings. It is really sad for a fellow Buddhist to read of their activities - if they or their associates read this, they are seriously advised to focus their efforts on the Buddha's teachings regarding suffering and its ending, and practice to that end.

Reflecting on these Buddhists' actions described above may help us somewhat. They are acting out of fear and attachment, which unenlightened people do the world over. It is a real shame however, that as senior monks respected by countless Burmese Buddhists, they are so deeply enmeshed in deluded thoughts and actions. Clearly, they are fearful of the majority Buddhist traditions of Burma being diluted or even destroyed by an increase in Muslim population, especially if it comes at the expense of the former. This comes out of being attached to their Buddhist identity, that feeling that says, "I am Buddhist" or "I am Burmese," and not being able to see beyond such a limited and limiting perspective. Of course, we are all made up of cultural, ethnic, and hereditary factors. But Buddhism teaches us how to realize that awareness that lies behind all these particular faces and see the original face that lies behind them.

To illustrate this point more concretely, we can take this author as an example. I am a man. I am British. I am caucasian. I am middle-aged. I am Buddhist. I am straight. I am married. Etc. But, if I take the time to look beyond these various masks that I have adopted over my life, what do I find? Looking back here now, I do not see a caucasian, middle-aged face, but rather a clear, spacious awareness. Moreover this awareness (or original face, or no-face) is full of whatever is present, as there is nothing here to keep it all out. If I were to see you now, in truth I would be you, for your face would be present here, in my no-face. And this would surely be so for you also, but in reverse - you would have my face! (You can test this out right now by simply looking and seeing what is the case in this present moment - what do you see where you are?) For U Wirathu & his colleagues too, this holds true. If he were to look at a Muslim right now, he would see a wonderful human face existing in his own no-face - the two would be one. Then, there are no divisions, whether cultural, religious or otherwise. May all beings be happy.

The above is adapted from an article on The Buddhist Channel, which can be read here: Monk's Convention in Burma
Posted by G at 9:00 AM

One news source reported on this conference quite badly. They suggested in one article that this conference was almost solely about the anti-marriage proposal. In fact,according to U Dhammapiya, the spokemonk for the conference:"... the proposal was not directly related to the meeting.
"The draft law was proposed at the wrong place and caused confusion,". http://www.buddhistchannel.tv/index.php?id=51,11489,0,0,1,0

Further, a few friends attended the conference and none of them heard of the proposal being submitted for consideration in the general assembly.

It would appear that U Wirathu is a bit of a rogue monk on this issue, at least in terms of this conference.

Other than that clarification, you are spot on with the rest of this post and think you would find the majority of Myanmar monks in agreement

Thanks for the clarification, Anonymous. In your quote, U Dhammapiya does not actually disagree with the proposal either, which could also cause "confusion." Hopefully, he will do so when he thinks he is 'at the right place.' It is reassuring to read your opinion that most Burmese monks would agree with the thrust of the article. Let's hope so!

READ THE BOOK 'DECLINE AND DEVELOPMENT OF BUDDHISM' BY SAYADAW U SUMANA (YR U).

UNDER THE HEADING 'THE NEW MILLENNIUM', AT PAGE 9, LORD BUDDHA IN 'PANCAKA NIPATA OF ANGUTTARANIKAYA' PREDICTED THAT, IN THE FUTURE, MONKS WILL PUT FORTH NO EFFORT TO ATTAIN THE UNATTAINED, TO MASTER THE UNMASTERED, TO REALIZE THE UNREALIZED AND THOSE WHO COME AFTER THEM WILL FALL INTO WRONG VIEWS AND BECOME INDULGENT, LAZY AND DEGENERATE. THUS,MONK,FROM CORRUPT DHAMMA COMES CORRUPT DISCIPLINE, FROM CORRUPT DISCIPLINE COMES CORRUPT DHAMMA'.

Thank you Tan. Something to reflect on...