Thai Buddhism: A Land of Smiles 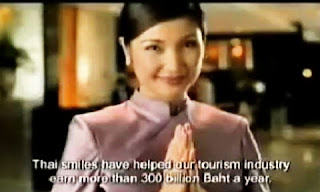 In Thailand, it pays to smile!

Thailand is rightly known as the Land of Smiles (เมอืงยิ้ม / 'meuang-yim' in Thai). Everywhere you go in the country, you will be greeted by smiles. Often in the most difficult of situations, smiles will be seen. Why? Well, to smile in adversity is considered a virtue in Thai culture, and it is also considered polite, whereas a grimace or frown is usually taken as impolite. Moreover, a smile can hide a multitude of sins; guilt, embarrassment, unease, dislike and even anger. It communicates warmth & friendliness, visual signals that make people feel at ease, and feeling at ease (สบาย/ 'sabai' in Thai) is a quality that Thais consider most important.

Of course, not everyone smiles all the time in Thailand; that would be insane! When upset a Thai can cry or display other behavior that reveals their feelings. And, as Thailand modernizes, its traditions are coming under continual strain, and the age-old customs of politeness and smiling are being worn away. Nevertheless, even amongst the more modern set in Thai society, smiles are much more abundant than found in many other countries. And its effects are immediate; when we smile with each other we feel more relaxed and happy. Smiling isn't just a result of being happy; smiling can inspire a happier state of mind as well.

Again, as indicated above, not all smiles in Thailand are genuine in the sense that a person smiling really feels happy or actually likes the person they are smiling to. A Thai can sweetly smile to you while inside they might be thinking something like, "What a jerk!" Seeing the behavior of a lot of foreigners in Thailand, it would seem that this reaction is probably widespread! An incident from many years ago comes to mind. In a fast-food restaurant in Bangkok, a western man and his small children had been waiting quite some time for their takeaway meal. Too much time for the westerner's liking, so he promptly started to berate the staff, who reacted by standing silently staring at him with wide grins on their faces. Probably misunderstanding their smiles as smirks, he shouted even louder at them until his food finally arrived and he stormed out, children in tow.

The above story illustrates the cultural importance of smiling in Thailand. The staff were not smiling at the foreigner, as though laughing at him, but were smiling to him, in the hope of placating him and quietening him down. It didn't work, as the westerner no doubt thought the smiles were completely inappropriate in that situation. For Thais, however, a smile from someone not performing to their expectations will normally calm them down, at least for a while. This goes to show that wise usage of the smile is culturally-dependent, and this should be understood so's not to create unnecessary antagonism. This withstanding, non-Thais can learn from the Thais' implementation of smiling. And this is related to Buddhist practice too, as it is in the spirit of Buddhism to act in friendly, non-aggressive ways to others, and smiling can assist in this. (It's worth noting that many eastern peoples that use the smile in the same way as the Thais, such as Cambodians, Laotians, and Burmese, etc. are also predominately Buddhist.)

Now, walking around with a permanent grin on one's face is likely to get one locked up, or at the very least, one will find threes giving one a wide birth when in public. The smile should be primarily used when actually in contact with others (animals included). It's interesting to experiment with smiling and see if people respond differently; this author has found that they do. And, when smiling is combined with qualities traditionally lauded in Buddhism, such as calmness, friendliness, helpfulness, gentleness etc., it creates a very positive atmosphere not only for the recipients of the smile, but also for the smiler. Why not try it? Start by smiling more in specific situations, such as at home or at work, and see how people respond to you. Depending on your particular circumstances, you will need to adjust when & how much you smile, but the results will surely be positive…overall. Smile away, and create a land of smiles in your own life!
Posted by G at 12:00 AM