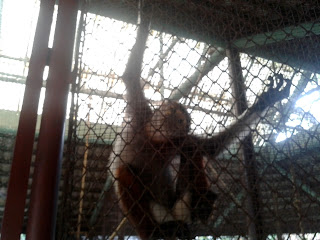 A monkey 'enjoying' itself in a Bangkok zoo.

When I look at my two dogs, I do not see organic machines or hairy objects to be kicked around with impunity. I see living beings with feelings & the ability to suffer like all sentient beings. Humans are not unique in these respects. Both dogs have attachments which when unsatisfied clearly bring suffering. For example, when my wife goes out, the younger dog will sit by the door looking forlorn, but when she returns, both animals jump around excitedly yelping with apparent delight (as I do!). Witnessing such attachments & resultant suffering, compassion arises for these creatures, just as it does for humans.

However, when we look around at how people in general treat animals, the story is very different. I come from Britain, a country that prides itself on being 'animal lovers,' and yet, cruelty to animals is widely practiced in the UK. For sure, many, many people pamper their pets, whether they be dogs, cats, parrots, pythons or stick insects. But, away from these personal examples of kindness to animals (much of which is born of attachment & personal interest), there is much to be saddened by. I recall a story a (reliable) friend told me when we were teenagers that one day he came across a hedgehog. For some reason, the thought came into his mind to kick the creature. This he did continuously until the helpless animal perished. Normally, this friend was a friendly, likable person, but when confronted with a wild animal to which he had no attachment, he mercilessly killed it.

Of course, the above tale is an unusually gruesome example of human nastiness to animals. But other, somewhat less horrible occurrences of animal cruelty can easily be observed. I recall witnessing another friend of mine, around twenty years ago, kicking his springer spaniel in the ribs because she was too 'scatty.' She was a hunting dog, and prior to motherhood had been a fine companion on my associates wanderings through the Welsh countryside. But, despite being a 'spiritual guy,' and something of a guru to quite a number of people, this man thought it perfectly okay to treat his dog this way. I have also witnessed other people, known and unknown to me, treating animals with a lack of concern if not actual cruelty, and I would be surprised if most of my readers could not recall similar occasions in their own lives.

Perhaps part of the problem is that we think ourselves the owners of animals. We say, "This is my dog," and we mean it in the same possessive manner that we might state, "This is my car." (And, as cars are way more expensive than your average mutt, the latter is often likely to be valued less than the former.) We do not normally speak of people in the same way. When we say, "This is my wife," we are not equating her with inanimate objects that we possess, but stating a more equal relationship. This, of course, is not true of all places & all times, so in the past wives were thought of as possessions, and in some societies to this day, such thinking continues.

But, do animals really belong to us in the way a car does? With pets, many of us would surely say not, stating old standards like, "A dog is a man's best friend." But, does this appreciation really extend beyond what we get out of these animals? When they don't supply us with the comfort that we expect from them, do we still feel positively towards them, caring about their wellbeing or do we consider them a burden to be rid of, like the pervebial puppy ditched after Christmas. So, while a dog may well be someone's best friend, can we say the following with certainty: "A man is a dog's best friend." Friendship should be mutual and equal, after all, shouldn't it?

On a visit to a zoo in Bangkok, looking at the animals in somewhat small enclosures aroused a feeling of sadness. A bear, admittedly in a larger area than most, repetitively wandered up and down on the edge of a moat, looking for a way out. It did not look particularly happy, although admittedly the facial expressions of bears are not a speciality of mine! The caged monkeys looked rather bored in their pens, too, although it may have been the effects of the midmorning heat. The overall impression of the zoo was of a place where animals were prisoners, locked in cages as living exhibits unable to escape to the freedom they'd probably prefer. (Having said this, it should be noted that the natural habitats that these creatures would normally live in have largely been destroyed, so zoos may be their only possible home for the time being.)

Staying with Thailand for a moment, it is worth noting that even in a country that considers itself Buddhist, cruelty towards, and lack of concern for, animals is widespread. This despite the Buddha encouraging his disciples to have compassion and kindness for all creatures. Generally, Thais seem unconcerned with the sufferings of animals, and don't give them a second thought apart from which ones to eat next. Of course, there are those that have pets and look after them with love, but even these people often appear to lack considerate for any other creatures. A common practice in Thai Buddhist temples is for visitors to pay so they can set free caged birds. But, no-one appears to care about the birds themselves, it is the merit that the humans involved will gain for setting them free that is of prime importance. And who put the birds in cages in the frost place? Possibly those receiving all that lovely dose for letting them go; do they make merit for their part in this? (It has been told to me by some Thais that the birds used are actually trained to fly back to the cages afterwards, anyway. They are somewhat domesticated, and no-one is really freeing them as they have been conditioned to return to captivity!)

As carnivores, the human species and its evolutionary forebears have eaten meat for millions of years. Today, this remains the case for the vast majority of the human race. Seeing film of animals being slaughtered is not a pretty sight, and depending on the methods used, it is often not a painless one, either. Moreover, battery hens crammed in tiny cages like 'egg machines' (which is how they are presumably viewed by those that keep them there) is another distressing image. Those of us that do not eat meat or intensively farmed eggs cannot rest on our laurels, either. For anyone that is part of a society that treats animals in these ways is to some extent responsible. Everyone concerned with animal welfare should be playing their part to improve animals' living conditions in the human world. This can be done through pressure groups, politics, and everyday actions and speech; to shy away from communicating about these issues is to abandon these animals to their fate.

Animal welfare should be of prime concern to Buddhists, as we have received teachings that highly regard kindness to animals. But, if Thailand is typical of Buddhist cultures across Asia on this issue - and there is no reason to assume that it isn't - Buddhists have absolutely no reason to feel that they treat animals better than others do. Whatever our beliefs, as human beings, we can observe the suffering of other creatures, and we can take measures to alleviate that suffering. This, of course, includes other people, but it should also include other animals, for our hearts are reflected in the ways that we treat such creatures. Outer cruelty and neglect are indicative of inner failings, and if we wish to develop as both Buddhists and as a species in general, animal welfare should be one of our top priorities.
Posted by G at 12:00 AM

Thanks for sharing this.

Thanks for the thanks. :)