Review: In the Buddha's Words, by Bhikkhu Bodhi 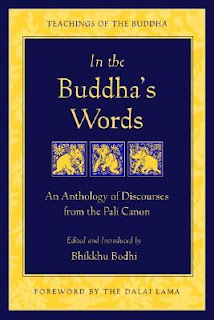 There are several good translations available of parts of the Pali Canon (Buddhist Scriptures) in English. A recent addition to this growing list of extracts of the Tipitaka (another name for the Pali Canon) is called “In the Buddha’s Words” and is the work of the well-known and well-respected American monk Bhikkhu Bodhi. The book typically contains the usual translations of the Buddha’s teachings on suffering (dukkha), enlightenment (bodhi), the Buddhist Path (magga) etc. What is distinctive about this latest compilation is that it contains a broad sweep of teachings of the Buddha, not only focusing on renunciation and the ultimate goal of enlightenment, but also featuring subjects such as gaining present life happiness and a decent rebirth.

The Venerable Bodhi divides the Blessed One’s dispensation into chapters, some of which are called The Human Condition (life without Dharma; living in delusion from life to life), The Bringer of Light (the coming and development of the Buddha), The Path to Liberation (the Buddhist Way to enlightenment), and Mastering the Mind (meditation and mindfulness). Other chapters include The Happiness Visible in this Present Life which regards the fulfillment of moral and social duties that result in a content life. Bhikkhu Bodhi emphasizes in this part of the book that as the Buddha said himself, he came “for the welfare of the multitude, for the happiness of the multitude, out of compassion for the world, for the good, welfare, and happiness of gods and humans.” This chapter reveals the Buddha’s words on how laypeople can live in the world, showing the wise and compassionate ways that we can handle our various relationships in society towards parents, children, teachers, students, friends, and partners.

The book doesn’t ignore the pinnacle of the Buddha’s teachings, however, and the chapter entitled The Planes of Realization features many important sermons on the noble eightfold path (ariya-atthangika-magga) to awakening and the four types of noble person (ariya-puggala), who have entered the stream to enlightenment, and culminate in the arahant, an enlightened one. Shining the Light of Wisdom is a chapter focusing on the nature of both wisdom (panna) and nirvana, and includes many illuminating discourses on the five aggregates that make up experience and the somewhat complicated teaching of dependent origination (paticca- samuppada).

Bhikkhu Bodhi introduces each chapter with his own insightful comments, making clear how each part of the Buddha’s teachings fits into the scheme as a whole, organized as a progressive path from The Human Condition through to The Planes of Realization. He displays a depth of understanding of the Tipitaka that spans the aforementioned and previously well-covered subjects of renunciation and enlightenment as well as how to be happy in this current life, which has often been neglected by his predecessors.

The Buddha divided the progress of a Buddhist into three stages: pariyatti (study), patipatti (practice), and pativedha (‘penetration’ or realization). Reading too many books may well hold back practical progress and ‘penetration’ of the Buddhist truths, but one book that will complement both practice and realization is In the Buddha’s Words. This book gives us a clear and concise account of the teachings attributed to the Buddha, regarding the whole of his dispensation, and as such is a boon to both renunciant and layperson, whatever their level of practice. I strongly recommend it to anyone curious about the Buddha’s teachings.

The above book is published by Wisdom Books, and is available from their website here: In the Buddha's Words.
Posted by G at 12:00 AM


The following resource is well worth checking out: https://mynichecomp.com/index.php?subject=12

You've already done so, Anonymous. Thanks for your comment & link. Be well on the path!