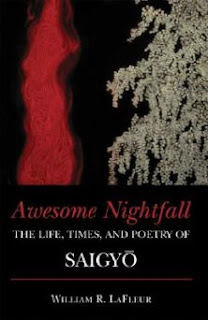 This book is superb. In fact, it lives up to its title, being an awesome account of the 'nightfall' of a poet into old age, as well as the descent of feudal Japan into unprecedented civil war. The translator, William R. LaFleur has done an excellent job, not just of translating the Japanese verse into English, but of setting the scene in such a clear historical context in the first part of the book. If he didn't receive any awards for his fantastic efforts in producing 'Awesome Nightfall,' it's something of an injustice, to say the least.

As hinted at above, the book is divided into two parts, the first being called 'The Life and Times of Saigyo,' and the second 'Poems of Saigyo.' Sometimes introductory sections of books can be somewhat dry, even boring - occasionally superfluous - to the main course. Not with this book. LaFleur clearly has a great love of his subject, and has spent decades studying Saigyo, also. This gives him an insight into an otherwise mysterious figure that many translators would never have. Which, in turn, sheds light on the poems themselves, and helps the reader to make more sense of them. He sums Saigyo up neatly thus:

"Much of the time Saigyo, originally a samurai, grappled with the implications of having become a monk. And, because he lived in 'interesting' times, he struggled to understand and articulate the connection between his religious tradition and the social chaos he witnessed firsthand. Rightly known to many Japanese today as an unusually perceptive celebrant of nature's beauty, Saigyo's sensitivity toward human conflict was equally deep. War was much on his mind. And he wrote about it more than any other poet of his era."
('Awesome Nightfall,'  p.1)

Saigyo (1118-1190) was an intriguing character. As La Fleur admits, the information that we have of the poet is sketchy, and without corroborating sources, it's difficult to know if even this is true. What is undisputed is that Saigyo was born into a samurai clan, and that when still a young man he decided to become a Buddhist monk, something that cannot have been easy. Even before this, he wrote poetry, which was popular in the court of retired - but still very powerful) Emperor Toba. After ordination, Saigyo adopted the life of a wandering monk, contemplating Buddhist teachings and composing poetry. He has been the inspiration for numerous Japanese poets since, most notable the greatest of them all, Basho.

Many poems appear in the long section referred to above, where LaFeur explores them with his expert eye, explaining the significance of a phrase here and a proper name there, as well as detailing the historical context in which they were written. They are all waka, a Japanese form of five line poetry that has enough brevity to contain elements of vagueness (mystery), and as well as enough room for more descriptive prowess than found in that more famous Japanese form of verse, the haiku. LaFeur's analysis of the poems in full of interesting insights:

"I wish I knew
the fate of my father,
and I'd like
to know too if his place
in flames will also be mine.
There seems to be something more here than the quasi-formalized sentiments of a dutiful son. Saigyo, who can be assumed to have performed rites to pacify his deceased warrior father, Noriyasu, seems to be existentially worried that the warrior, in a killing profession by definition, may have a karmic burden so great that it cannot be easily removed. And that, in turn, makes him anxious about his own future."
(Ibib. p.46)

As to the poems themselves, LaFeur has translated them beautifully, retaining both the meaning and the feeling of the originals, as far as this reviewer can tell. Saigyo's sensitive nature and worries come through aplenty. As do his love of cherry blossoms, his Buddhist worldview, and the conflict that he felt between the two, as he appeared to believe he was overly attached to the former.

As encouragement to practice, and a source of reflection, this work is of much value to Buddhists, who might even achieve a direct experience tof this present enlightened moment through its words. For both Buddhists and poetry lovers alike, this book is wonderful. Meticulously researched and superbly written, it stands as work of art in itself, lit by the light of the unique talents of Saigyo and LaFleur. It comes highly recommended by this reviewer, who cannot praise it enough. Below are a selection of verse from the book to give the reader a taste of its beauty.

"Waking me up
to the spring that's come,
water trickles down
the valley, and long crag-bound ice
now cracks open, slides free."
(Ibid. p.74)
"This leaky, tumbledown
grass hut left an opening for the moon,
and I gazed at it
all the while it was mirrored
in a teardrop fallen on my sleeve."
(Ibid. 86)
"Nothing lost…
since in satori everything
thrown away
comes back again: the life
given up for an 'other'"
(Ibid. p.111)
"Yoshino Mountains:
blossoms tumble to the foot
of trees, fastening
my heart there with them
waiting still for my return."
(Ibid. p.126)
"In early winter's rain
I'm pleased when up at the peak
clouds spread open
to show me the moon I longed to see:
a storm that knows compassion."
(Ibid. p.146)

The above book is published by Wisdom Publications, and is available from their website at:
Awesome Nightfall: The Life and Times of Saigyo
Posted by G at 12:00 AM