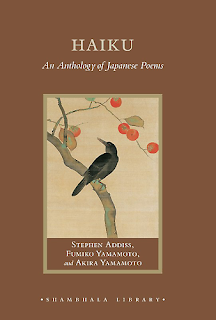 What a delight this little book is. To hold it in the hand is a very pleasing experience to begin with: it is light (for a hardback), is not much bigger than an adult's hand, and is wrapped in a beautiful brown and gold cover, illustrated with a painting by Sakai Hoitsu (see above). The contents of the book are even more impressive. As the title makes clear, it is a collection of haiku translated from the Japanese by Addiss and the Yamamotos. And what an excellent job they've done! Divided into three sections, 'The Pulse of Nature,' Human Voices,' and 'Resonance and Reverberation,' Haiku also features brief biographies of all the poets featured, as well as black and white prints by Japanese artists including the famous Zen priest Hakuin Ekaku. Beautiful.

The Introduction gives the reader a concise account of the structure of haiku, its history in Japan, and an argument advocating a somewhat freer translation of haiku into English than the traditional seventeen syllables. In the Japanese originals of the poems that appear in this book, the standard form was seventeen sound units which amount to short syllables, so the word haibun consists of three such units, hai-bu-n (the final 'n' counting as a separate unit). And, as explained in the Introduction, Japanese uses more syllables to represent the same content than English generally does, so extra words are needed to pad out English translations of the japanese originals if seventeen syllables are rigorously kept to. The editors of this work have decided, wisely in this reviewers opinion, to ignore the seventeen syllable rule, and focus more on accurate and poetic renderings of the haiku.

To illustrate the above issues, the Introduction skillfully uses the example of the most famous of these poems, the 'ancient pond' verse of the greatest of all haiku poets, Basho (1644-1694). It argues that a faithful translation of this poem requires less syllables than in the Japanese original, coming up with the following on p.viii:

Old pond
a frog jumps in -
the sound of water

Other examples are used to elucidate the reader on other issues involved in the translation work, especially with regards to whether using a parallel translation (line-by-line), or a freer form where the line oder doesn't correspond with the original. The view here is that it depends on the particular poem, with some a parallel rendering works well, with others less literal version is required. Returning to Basho's frog haiku, the book contains a nice, albeit brief, exploration of the possible meanings of the piece; "old (the pond) verses new (the jumping), a long time span and immediacy, sight and sound, serenity and the surprise of breaking it" (paraphrased from p.xi). So much contained in so few words - the beauty of haiku!

Moving on to the main part of the book, the poems and black and white prints, the book really excels itself. The editors have chosen a wide range of haiku by many of the great poets from Japan's rich cultural history. Basho is joined by the other three masters of the form: Buson (1716-1783), Issa (1763-1827), and Shiki (1867-1902). Alongside these superstars of the haiku world, there are over ninety other poets featured. A real haiku fest in such a small book! Here's some more samples from the book featuring the three masters mentioned above:

An old well
falling into its darkness
a camellia
(Buson, p.5)

Charcoal fire -
my years dwindle down
just like that
(Issa, p.124)
Killing the spider
then so lonely -
evening cold
(Shiki, p.150)
Taken in turn from each of the three sections referred to earlier, these poems each contain the subtle nuances of meaning not always apparent in the succinct nature of haiku. And in doing so, these haiku and the others in the book reflect the influence of Buddhism on the Japanese psyche and arts. Buson's camellia, for example, speaks of death and the unknown, whilst Issa's verse clearly refers to the Buddhist understanding of impermanence and aging, whilst Shiki talks of morality and regret…and the reader of this review can surely come up with his or her own interpretations also. This ambiguity inherent in haiku is one of their attractions, and for some, a source of infuriating vagueness. And yet, if this book is read cover to cover, this reviewer challenges even the staunchest of haiku-haters to deny the meanings and beauty contained in them!

Returning for a moment to the Buddhist sentiments that through much haiku, we might briefly explore what value this book has spiritually. Haiku speak of the moment, this moment, as experienced by the poet. In doing so, they give the reader a glimpse into eternity. For, eternity or the Deathless as the Buddha called it, is only ever known in this current present moment; it is never the product of memory or imagination. The haiku in this book have the capacity to jolt the reader into this current moment, leaving her or him with a taste of the eternal. Hopefully, this will be realized by the reader of this review with the batch of quoted poems given below:

The autumn wind
takes the shape
of pampas grass
(Kigin, p.73)
At the sound of the sea
the sunflowers open
their black eyes
(Yuji, p.48)

The above book is published by Shambhala Publications, and is available from their website at:
Haiku, An Anthology of Japanese Poems
Posted by G at 12:00 AM

Beautiful haiku... May I share a Haiku for Akira Kurosawa, the famous Japanese movie director in https://youtu.be/_EEvpJBdroQ