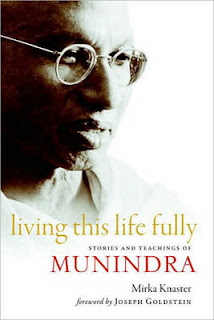 Mirka Knaster, former pupil of Anagarika Munindra, has supplied a copy of her book 'Living This Life Fully: Stories and Teachings of Munindra' so that it might be reviewed on these pages. Now, there's always a risk when someone does this, as the author of this review refuses to write nice stuff about books that he doesn't find well-written or inspirational, but Mirka needn't be perturbed by this statement, as her book passes both criteria comfortably, to say the least. She writes with a warm, insider's view of the man and his teachings, giving intimate insights into Munindra's gentle wisdom, with many other contributors helping in this task, including Sharon Salzberg, Joseph Goldstein, Jack Kornfield, Sylvia Boorstein, Daniel Goleman, Kamala Masters, Christopher Titmuss, S. N. Goenka, Lama Surya Das, and Ram Dass. With the exception of S. N. Goenka, all these well-known meditation teachers studied under Munindra, which illustrates the influence that he has had on Buddhist practice in the West.


"Based on his personal knowledge, Munindra was convinced that even nowadays people are capable of tasting what the Buddha and his disciples experienced more than 2,500 years ago. What may seem out of the ordinary or even impossible is actually within reach of those who make the effort. Yet Munindra never pretended to be extraordinary, exceptional, or perfect. He was simply a flourishing human being, not a saint. With all his idiosyncrasies and fallibility, he walked the path and enabled others to walk it too." (Ibid. p.ix)
Time and again, the contributors to this work describe the soft yet unwavering manner of Munindra that was based in his own cultivation of metta (loving-kindness, or goodwill), recalling how he would gently bring their wandering minds back to the mindfulness of the present by drawing their attention to a small flower or how fruit was stacked on a market stall. They also recount how Munindra devoted his life to imparting Buddhist teachings to anyone that showed an interest, living the life of an anagarika, or homeless layperson so that he had no distracting commitments to either family or monastery. And, as Alan Clements recalls, Munindra had great patience, never talking down to questioners no matter how "dumb" their queries might seem, something echoed in the words of Lama Surya Das who notes that he was "very generous and patient with his time and his knowledge" (Ibid. p.125).

The book contains a brief biography written by Robert Pryor, another student of Munindra, which details his early years in Chittagong, in present day Bangladesh, to his work with Mahabodhi Society (1936-1957), practice and study in Burma with masters such as Mahasi Sayadaw (1957-1966), subsequent teaching in Bodh Gaya (1966-1985) and beyond (1985-2003). Quite a curriculum vitae for a Buddhist teacher! It is not in such facts that Munindra's worth is truly reflected, however, but in the skillful way that Mirka Knaster has woven the testaments of his many students into a coherent and stimulating read. Munundra comes across as an unassuming but uncompromising man, always willing to give of his wisdom, but not expecting anything in return. But, as the book illustrates, it wasn't just wisdom that he shared, for when he received gifts from grateful students, he was likely to pass them on to people in greater need than himself.  An amusing anecdote that shows the human side to the man is remembered by Vivian Darst:


"Throughout our trip to Europe, my friend and I were lugging around Munindra's luggage with all this stuff he was taking back to India. I used to give him a really bad time about it because I had to carry it into all these cars and planes. I used to say, 'You could buy it in India.' And he'd say, 'No, not the same quality.' I asked, 'What is it all for?' He wanted to give presents to family and friends, especially a lot of little children in Bodh Gaya." (Ibid. pp.54-55)
Knaster has organized the book into chapters each focusing on an aspect of the Buddha's teaching, such as Sati (Mindfulness), Dana (Generosity), Metta (Loving-Kindness), and Upekkha (Equanimity). As well featuring the stories and teachings of Munindra, every chapter ends with a neat definition of its main theme (such as 'Sati'), reflecting Munidra's own dependence on the Pali Canon as a source of validity for his own understandings and teachings. This makes the book more accessible to those that are not so familiar with Pali Buddhism, and helps those of us who have a propensity to forget what Pali we do know! Again, as useful as these sections are, it is the accounts of Munindra's compassionate wisdom that Knaster has done so well in describing, an act of respect to her teacher that does them both credit. It is with such an account that we will finish, here, and I for one am most grateful to Mirka and Munindra for sharing such insight with the world.


"Every step is taking you near the goal. Continuity is the secret of success. Anyone who wants to know the art of living, who wants to experience this Dhamma, has to understand it clearly. But as long as you are expecting, then it will not happen." (Ibid. p.127)
Posted by G at 7:01 AM

in buddhism i came acrss one of jagaro's blog on perfection. now i know those who seek perfection is simply feeding their ego. for me the buddha is not perfect but he is better than unaware men. perfection in buddhism is not something to the standard of a god but simply living to the fullest. monks may not be perfect but most likely they are doing their best to teach..

Hello Anonymous,
one of the synonyms of nirvana that the Buddha used was 'the perfect,' so perfection is definitely a part of enlightenment (or at least one way to view it or describe it). You are right, of course, that if we cling to the desire for perfection, then we are creating delusion and suffering, born of desire. I have much respect for Jagaro, however, so I'd rather not enter into any discussions about him. Let's keep these comments friendly and impersonal, shall we? :-)

well the buddha has also many mistakes in his life before he reach the unsurpassed emptiness.....


nirvana is perfect because it is detached and all embracing. in fact there, it is the no-thingness where imperfection and ego dissolves.

Hello, Anonymous.
You write that the Buddha was not perfect but that nirvana is perfect, and yet you also write that he reached "the unsurpassed emptiness." If the latter is not a description of the former, then we're all pink elephants!

The problem here seems to be that we are getting lost in a sea of words and beliefs. These are all concepts, and if concepts are not grounded in experience, they are mere argumentation. Have you experienced enlightenment to pronounce what it is? Have you met the Buddha to declare whether he was perfect or not?

Surely the whole point of Buddhism is live the teachings, not pay lip service to them. If we spend one minute meditating, this is worth ten years philosophizing! Let's all find a quiet place, sit down, and listen...

This last sentence is a striking and a most important teaching!

Have a nice sunday, Gary!

Thanks for the kind words, Fialka012! Hope you continue to find 'Buddha Space' an interesting blog.