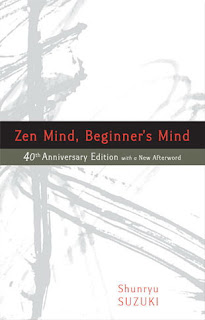 "In the beginner's mind there are many possibilities,
but in the expert's there are few."
Review
'Zen Mind, Beginner's Mind' is a wonderful little book. In it, the Soto Zen Buddhist Master Shunryu Suzuki presents us with an ever fresh view of Zen Buddhism, based upon zazen practice. Again and again, he brings our mind to recognize the importance of the beginner's mind, an attitude to practice that does not assume, consciously or unconsciously, that we know it all, let alone that we've done it all and gotten the t-shirt. In Zen, there is no t-shirt, only what Suzuki called the big mind (as opposed to our egoistic small mind). In the transcribed lectures that make up the main section of this book, he equates this big mind with the innocence of the beginner's mind which approaches the meditation cushion (and life) with an open, yet focused attitude.


"Big mind is something to express, not something to figure out.
Big mind is something you have, not something to seek for."
Suzuki mixes advice on how to meditate with the realization that to meditate is enlightenment, at least when that meditation is the Soto version of zazen, or 'just sitting.' He references the great Zen Master Dogen throughout the book, but also mentions Rinzai (the founder of the other major sect of Zen Buddhism). This illustrates Suzuki's non-sectarian approach to Buddhism, which he emphasizes when he echoes Dogen in declaring that there's no such sect as Soto, and that true Buddhists are simply Buddhists, and nothing else. In the final chapter of the book, Suzuki addresses issues concerning the establishment of Zen in America, but even this potentially worldly issue is discussed from a contemplative perspective, ever keeping Zen in mind.


"I feel Americans, especially young Americans, have a great opportunity to find out the true way of life for human beings. You are quite free of material things and you begin Zen practice with a very pure mind, a beginner's mind."
Shambhala's 40th anniversary edition of 'Zen Mind, Beginner's Mind' also retains the preface by Huston Smith and Introduction by Suzuki's Dharma heir Richard Baker, and adds an interesting afterword by David Chadwick, another of Suzuki's students. In it, he not only chronicles the history of this amazing little book, but also includes anecdotes from those who knew, or met, Shunryu Suzuki. One such anecdote that stands out regards that great namesake and fellow promoter of Zen Buddhism in the West, Daisetz Teitaro Suzuki, who has featured on these pages previously. When on a bus, Shunryu Susuki was asked if he was D.T. Suzuki, to which he replied, "No, he's the big Suzuki, I'm the small one!" As Huston Smith states in the book's afterward, it's nearer the truth to see the two Suzuki's as complementing one another in their efforts to spread the wisdom of Zen Buddhism in the Occident. And, in this regard, 'Zen Mind, Beginner's Mind' has played an important role itself in disseminating Zen across the world. Let's finish this brief review with one more quote from Shunryu Suzuki:


"Moment after moment, everyone comes out from nothingness.
This is the true joy of life."
Competition
Now to the 'juicy' part of this blog entry. Shambala Publications have very kindly said that they will send a free copy of their 40th anniversary imprint of Shunryu Suzuki's 'Zen Mind, Beginner's Mind' to the winner of a competition run here on 'Buddha Space.' So, to win the book you must answer the following question, posting your answer in the comments section, linked to at the bottom of this article. The winner will be announced in the same section. Now, to the question itself: What does your beginner's mind look like right now? (The judge's decision will be final and no dialogue will be entered into after it is announced, unless some sort of bribery is discussed.) The closing date for entries is 31th December; so write on!

Note: All quotations are taken from 'Zen Mind, Beginner's Mind' by Shunryu Suzuki, and published by Shambala Publications, 2010.
Posted by G at 2:00 PM

there is observation but no such thing as observer and being observed. with this there is only awareness where the depths of nothingness surfaced.

No final frontier, no final destination. Just sunyata - emptiness or fullness. Samsara or nibbana. Two sides of the same coin.

It is the final frontier - Captain Kirk says so in Star Trek! ;-)

Beautiful poem, Adam! (Not that you've won the competition...yet!)

Sometime next week, when the festivities have died down, I'll announce the 'Zen Mind, Beginner's Mind' winner in this comment thread, and leave a message on the front page of 'Buddha Space.'

In the meantime,
Have a mindful New year everyone!
G

And the winner is...

Great poem, mate. Today I'm off with the wife and dog for a couple of days in the Thai countryside, but if you email me your full name and address, I'll forward it to Shambhala Publications, and they'll send you a copy of 'Zen Mind, Beginner's Mind.' (No doubt, their offices are shut for the holidays, so it'll take some time to get a response from them, Adam. Please have khanti!) Anyway, congratulations!