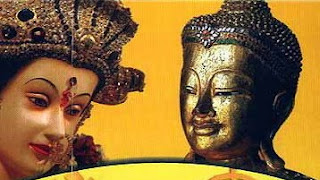 I enjoyed this post, the concept of no self always gets me.

Hope that too; and not only regarding to th}ese two faiths, but to all of the different ways of feeling, understanding and aproaching to the truth, as they are only different paths that lead to the same... thing???

Producestand: "The concept of no self always gets me." Love that!!

Eveything ultimately points back to our true (empty-of-self) nature, Isis, doesn't it? Unfortunately, we are so blind most of the time that we miss "it"!

Hope you would add my blog. Thanks a lot. Keep blogging....

Love your blog and you are added :) Keep up the good work and thanks for the kinds words. -- Kristen

Have added your blog to the 'Buddha Space' blog list, Kristen. Love the pictures on Nasa Images - I'm interested in both outer and inner space!

you can get healthy traffic from us and our visitors can get relative and useful information from your blog.

Hope you would add my blog.
Thanks a lot.Keep blogging....

Hi Anais,
Thank you for the kind comment. I've added your blog to the 'Buddha Space' blog roll.
Be well,
G.

Thanks very much for added my link on your Blog,

Thanks again and all the best with your endeavours!

Following rules (or guidelines, in the case of Buddhist laypeople) can indeed lead to the betterment of both society & the individual. Mindfulness, meditation, kindness, openness, and other aspects of the two traditions also have important parts to play in this process. Thanks for the comment, Julia P.