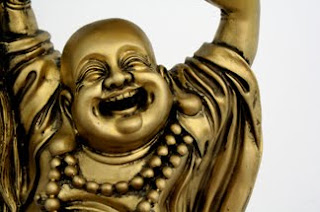 The Buddha's response to 'Buddhism'?

I appreciated your thoughts on this today. Thank you.

And I appreciate your comment, Khun Baobao. Khawp khun Khrap.

"Furthermore, by walking this Path we can taste liberation, which is the ultimate test as to whether we are walking the Buddha’s Way or not."

I think that this is the most important point here. Whether or not any of the suttas are the exact words of the Buddha are of little consequence. What matters is if they point in the direction of liberation.

84,000 Dharma Doors is the traditional number, Adam, but in these times of economic downturn, I guess even Dharma Doors can become scarcer! (Only kidding.)

We can read almost anything somewhere, Adam, especially in these days of the Web. Only yesterday, I read that America is the 'Land of the Free' - surely that's a typo!! (Free of what? Suffering? Self-delusion? Unwholesome roots? Ah, hang on a minute, I think I know: free of friends!!!) Only kidding all you lovely Americans out there...

There is a saying in the Christian doctrine: "by the fruits you shall know them".

I can say about Chistianism, that there is almost nothing left from the message of the Christ in the rituals or practices that the Catholic Church stablishes in its doctrine.

There are more and more non spiritual persons that claim to be 'christians' and I think that the same thing happens with other religions..

Only what is real prevails.. And it's so evident that, with the time, the simplicity of the truth has been lost and only remains the empty forms that don't lead us to the enlightment or spiritual awakening; on the contrary: they keep us away from the real truth.

When Jesus said that we are made as God's image, he was talking about the soul, the real being, the divine part within the human being. But I think that these words were missunderstood and that's why we pray to a 'superman- like' god, that was made as our image...

I'm against all doctrines that show the emptiness that remains from the original truth, spoken by the prophets that originated them. I understand that the rituals are important when they help us to remember what we shouldn't forget... But the truth is that is the attitude of the believer that makes the ritual to be a real one. And it's easy to see wether it works or not: by the fruits of the tree. There is no mistake when we get to know a person by the acts instead or the words.

There is a light in a spiritual person's eyes that speaks by itself. There is no need of words when that happens and it doesn't matter the religion that the person practices.

One thing is sure: Buddha asd Jesus and Mohamed would be so dissapointed if they come back to see what people do on their behalf... All kind of aberrations are performed in 'God's name'. The word of the prophets has been distorted in order to justify what has no justification.

The hope that remains is that the truth also lives in the souls that could understand it when they first saw it... and keep themselves faithful to their path...

Thanks for the comments, Isis. You put forth many thought-provoking ideas. One that sparked an immediate response was the following:

"There is a light in a spiritual person's eyes that speaks by itself. There is no need of words when that happens and it doesn't matter the religion that the person practices."

Moreover, Isis, that Light can be seen first person, as it were, for if we turn our attention around 180 degrees from the world to what's right here, we see that Light as our very being.

As Buddhism spreads like a small wildfire in America, this is a very timely post on your blog space. No religious ritual or institution is going to bring us release of suffering. That can only happen from within the person. As Bankei keeps "preaching" we are all perfectly enlightened right now. Not a flaw exists in us. It is just that we keep making crap up that gets in the way. :) ( i dont think he says crap). :) So no matter what form of Buddhism, or for that matter any path. I hope that you realize that you are complete right now, with no flaws or anything to work on. The task is staying in this now of life....the only "time" we will ever have....don't waste it...more Bankei. :)

Is the making up of all this "crap" a flaw, Chana? Perhaps we need to experience the apparent unenlightened mind to appreciate the Uncreated "Mind." On the other hand, right now even the "crap" can be seen to be good, even this throbbing pain from cervical spondylosis!

I do not think you or who ever has cervical spondylosis has a flaw, i am sorry that this person has it. My younger brother has suffered with it for almost 30 years. Physical suffering brings with it much mental distress, that can not be avoided. Life is truly Dukkha, and almost everyday. Soon i will be 58 years old/young. The body is not the same as it was 20-30 years ago. Old Age.....nothing you can do about it....then comes death, the ultimate "enemy" of which no human being has any idea of what happens after that. Again...Dukkha, and there is very little we can do about it. ( like when life feels like it is out of joint. )
I was referring to the understanding and practice that comes from believing in a religion, that is beneficial for those who accept the religions ways and rituals. But, there is a different way of viewing the universe that is not religious, of which I think the Buddha, Christ, Merton, Bankei, Hung Po, Alan Watts, and many many more people have come to realize. It seems you have this realization too. It goes beyond religious ritual and the need for fellow worshippers. Once this "knowing the mind and its' nakedness" is realized, we know that we create our own reality. Suffering is a part of this reality, i do not know how anyone could think otherwise. Self-pity does not occur in animals, but it can ruin a persons life. Indeed, there is no one i have met who has blissfully walked through intense suffering. Please pardon me if anyone thought that is what my previous post was getting at.
Flaws in our lives are real, i can live with mine. I do not try to get rid of them. As I continue down the path, some of them fall away. Others do not.
I have noticed in Bankei's response to people who are truly suffering there is great compassion, but there is also a very firm rebuke not to make more of it than necessary, and use it for an excuse for anger and retribution on the world. Of course he is not religious. :)

Bodies are flawed. They are subject to aging and death, not to mention suffering. Furthermore, they are imperfect and weak, which are synonyms for the word 'flaw.' Seeing things as they are is a crucial step along the Buddha's Path.

This spondylosis is a painful reminder of these facts, as well as a way to transcend them. For, it is through contemplating suffering that we can understand and let go of it. Accepting this body as a flawed thing helps to see beyond it to the awareness of the Buddha shining amidst the painful sensations. Nevertheless, feelings of compassion arise for your brother, Chana - I know how he feels - literally!