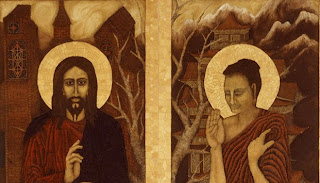 Christian enlightenment helps the mind in the midst of daily activities to be conscious of the soul.

Thanks for the comment, Soma. Reading your blog 'Christian Mysticism Weblog' (at http://soma77.wordpress.com/) revealed many parallels with Buddhist teachings:

"The world in itself has no reality at all because it is in perpetual change without much meaning or consistency. The objects and things existing in it are separated in time and space and are changing from one moment to the next. Therefore, the microcosm apart from the macrocosm is nothing but when it knows the macrocosm, it is reality itself, constant and full of being." (From the post 'Story of Adam and Eve')

"Our possessive nature spoils things, our attachments blind; they bind and hurt us so we need to let go of our old ways and become free because this detachment is our liberation." (From 'Soul, Christ Consciousness and Love')

"As we enter into a greater consciousness astonishing things happen that we thought were not possible, but we must take an honest look at our negative thoughts and let them go. Having the determination to expand our positive thoughts and take charge of our life will eliminate many problems, negative beliefs and unhappiness. We must have the courage to move forward into Christ consciousness where we are free from pain, desire, fear, conflict and worry." (From 'To Understand Spiritual Things')

The above quotes from 'Christian Mysticism Weblog' have much in common with the Way of the Buddha, and it is encouraging and inspiring to read your words, Soma. Thank you so much!

This is interesting and I need to reread and think about it, but just want to point out Thich Nhat Hanh's two books on the similarities between Buddhism and Christianity, Going Home and Living Buddha, Living Christ. Also, I want to mention the mainstream Catholic doctrine of the mystical body of Christ, in which all are one in Christ. We live in him and he lives in us. I used to be RC, but now consider myself a Buddhist who is also a Christian, though I am still trying to understand what that means!

True mystics of most religions seem to be experiencing the same reality whatever they call it.

I'm just back to the US after two weeks in Scotland and England in which I had the interesting experience of no sooner perceiving that some difficulty might be arising and returning to mindfulness and trying to look for equanimity and loving kindness than someone would appear to help me with whatever the problem was going to be. Didn't quite know what to make of this, because I didn't do anything with this expectation. But it happened quite often.

Interesting insights, Kirsti.
Your trip to the UK appears to have been an enlightening one, one way or another. Could your experiences there be indicative of the interconnectedness of life?

I'll have to consider this. I certainly believe that life is interconnected, that things are empty of a separate existence, that we "inter-are". But does that mean there is such benevolence and helpfulness everywhere? I don't know. But that seems to be what I experienced.

A traditional Buddhist response might be that you were experiencing the fruits of previous karma, Kristi. Or, on the other hand, we might take the advice of Ajahn Sumedho and see that at that time that was simply the way things were, and - more importantly - that at this present moment, this is the way it is. Even the thoughts that are occurring at this moment are simply the way it is, right now. Can we see them for what they are and then look at what is looking at them? In other words, what is reading these words? An interesting and enlightening exercise...

Interesting - I read this and I think of the concepts of unity that run throughout the symbology of the ancient Celts. Looking at the Arwen, the Five-Fold, and the Triskelion - all symbols of unity - from the unity of man and woman as two sides of the whole, to nature and its elements to what is sometimes taken as the Holy Trinity and also viewed as the unity of mind, body and spirit. Perhaps it is inherent in man to attempt to find this balance and we see it manifested in the faiths and philosopies developed in our cultures across time.

Thomas Merton who was a Trappist monk and a friend with D. T. Suzuki always expressed his kinship with Zen at the intimate level of kindred spirit.


The following is from

Z EN AND THE BIRDS OF APPETITE

"Where there is carrion lying, meat-eating birds circle and descend. Life and death are two. The living attack the dead, to their own profit. The dead lose nothing by it. They gain too, by being disposed of. Or they seem to, if you must think in terms of gain and loss. Do you then approach the study of Zen with the idea that there is something to be gained by it? This question is not intended as an implicit accusation. But it is, nevertheless, a serious question. Where there is a lot of fuss about "spirituality," "enlightenment" or just "turning on," it is often, because there are buzzards hovering around a corpse. This hovering, this circling, this descending, this cele­bration of victory, are not what is meant by the Study of Zen­ even though they may be a highly useful exercise in other contexts. And they enrich the birds of appetite.

Zen enriches no one. There is no body to be found. The­ birds may come and circle for a while in the place where it is thought to be. But they soon go elsewhere. When they are gone, the "nothing," the "no-body" that was there, suddenly appears. That is Zen. It was there all the time but the scaven­gers missed it, because it was not their kind of prey."

Interesting insights, Rence. Yes, there does indeed seem to be something in us that pushes us to understand the cosmos and our place in it. Even this can be viewed as a form of desire that leads to suffering, however, until it is seen for what it is and then transcended. Thanks for the comment.

Thanks for reminding us of Thomas Merton, Jack. A lovely quotation, too. Merton is definitely someone worth reading with regards the relationship between Christianity and Buddhism.

Thank you, G, for your thoughts. How well expressed. It is refreshing to read an author who is so well versed in Christianity's teaching. T'is food for thought.

History tells us that Christianity comes few hundred years after Buddhism. If there is any similarities, it must be Christ that practice and preach the doctrine of Buddhism and not the other way round

There's no proof that Christ knew anything of Buddhism, and similarities between different religions - not to mention philosophies, politics, mythologies, etc. - exist between cultures that existed thousands of years and miles apart, Frank. (Of course, sometimes ideas and practices do spread across the world, communism being a relatively modern example, but this is not always necessarily the case.)

To assume that Christ copied the Buddha or vice versa is a little naive, perhaps. Great ideas can (and will) sprout up across the globe and across time, for humans have the innate intelligence to develop them. Spiritual wisdom too will crop up in different places and epochs due to the innate Buddha (God/Dao/Brahman/Awareness etc.) that we all possess.