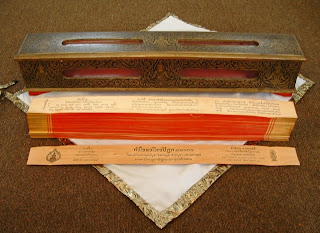 The Dharma encapsulated in scripture
Dharma is a crucial word in Buddhism. It has many forms and many interpretations. Dharma itself is an ancient Indian word from the Sanskrit language, and in a closely related language known as Pali it takes the form Dhamma. In other Asian languages, it is translated as 'fa' in Chinese, 'ho' in Japanese, and 'chos' in Tibetan. Usually here on Buddha Space it remains untranslated, for as the exploration of this term below will reveal, it is not a word easily rendered into English.

Generally, it has two main definitions which are 1) the Buddhist teachings and 2) a constituent factor that goes to make up experience. The main focus here will be the former meaning and its interpretations, but very briefly the latter will be looked at for the sake of coverage. Usually rendered in English with a small 'd', dharma indicates each element that forms part of the material and physical aspects of the world - not to mention any 'spiritual' phenomena that one may or may not believe in. Everything, therefore, that exists is either a dharma or made up of dharmas. Atoms, thoughts, clouds, art, cars, stars, and duck-billed platypuses consist of dharmas.

Normally represented in English with a capital 'D', Dharma has very different connotations to those written above. This means both the natural way of things, or universal law, and the Buddhist teachings that both point to this truth and describe the Path to realizing it (in other words, enlightenment). In the second sense, it is sometimes found in the longer form Buddhadharma - Buddhadhamma in Pali) - or other regional linguistic equivalents. Depending on what one accepts as genuine Buddhist teaching, this definition of Dharma may include the entirety of teachings to be found from the most ancient Buddhist texts right up to modern teachings, or it may be restricted to a particular sect or set of writings. An example of the latter would be a strict Theravada Buddhist understanding of Dhamma (this is the usual Theravada Buddhist form of the word) as being found in the Pali Canon, rejecting later texts such as the Prajna Paramita writings as heterodox.

As to Dharma representing the way-things-are, or 'the truth', this interpretation of the word is found in all major forms of Buddhism. In the Pali Canon, the Buddha is said to have declared that even when the Buddhist teachings don't exist, the Dharma still exists as the natural way of things. To realize this Dharma is to awaken to our own true nature, which is not made of the constituent dharmas described earlier, but is indefinable as being this, that, or the other. In Oriental Buddhism, the word Zen (and other regional variants) has much the same meaning, which could be deemed to be the transcendent, or the unconditioned as opposed to the conditioned (the dharmas).

This understanding of Dharma is not found in philosophy or ideas, however: it is an experience. To experience Dharma is to experience the facts of life regarding both the ephemeral elements (dharmas) of these bodies and minds, plus the timeless awareness in which they are known. In this sense, the Dharma is all dharmas, for they are found nowhere but in the midst of the truth, and it is found nowhere but right here in the phenomenal world. This experience is both conditioned and transitory, and yet unconditioned and endless. It is conditioned and transitory in its contents (all dharmas), and unconditioned and without end with regards its container. This container is not thoughts, emotions, sensations, memories, or the subconscious - it is awareness itself. Seeing dharmas not only with awareness but as awareness, rather than as a personality with all its limitations, we see the Dharma. And then, as the Thai monk Ajahn Chah pointed out, we are Dharma.
Posted by G at 12:01 AM

I thought of The Dhammapada, the collection of verses being illustrative of Buddhist Dhamma or moral system.

In the Introduction by Juan Mascaro, Dhamma is described as coming from the Sanskrit root DHR, which carries the meaning 'to support, to remain' and thus of 'law, a moral law, a spiritual law of righteousness, the eternal law of the Universe, Truth'. Pada, means 'foot, step' hence has the meaning of path. Thus Dhammapada suggests the Path of Dhamma, the right path of life which we make with our own footsteps, our own actions, and as you said, lead us to the supreme truth of Nibbana.

The translation of pada is sometimes given as 'verse' or 'portion', hence 'Verses of Dharma' or 'Portions of Dharma' as alternative English titles of the Dhammapada. 'Path of Dharma' somehow seems more appealing, however. Your explanation of its name revealing its contents is nice, too, Apprentice.

As you said G, dharma is a complex in the world of Buddhism.
It basically represents the teachings of Buddha but it is not limited to that much. Basically saying Dharma is the fundamental of Buddhism.
If you follow Dharma out of the respect for Lord Buddha, then Lord Buddha himself states that Lord Buddha wouldn't recognize that you.
But if you follow Dharma so that you can find the truth and be free from the world of suffering, then you will be immediately called the disciples of the Enlightened One.

Nice reflections, Antique Buddhas. Be well in the Dharma, as the Dharma.

Thank You G,
I will as you suggested.
And I loved the articles and hope to see even more interesting articles.
I happened to be a regular writer in one blog and I hope you would read and can contribute your articles too.
Burmese Art Blog