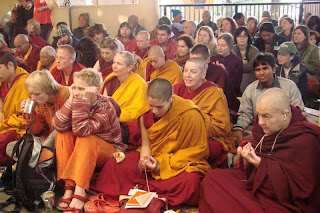 What makes these people 'Buddhist'  - their clothes?
What is it to be Buddhist? Obvious answers might include specific activities such as taking refuge in the Triple Gem, meditating, and visiting temples; alternatively, one might see certain beliefs as being indicative of being Buddhist, examples being convinced of the Four Noble truths, the Three Characteristics, Emptiness, or Dependent Arising. Such activities and beliefs differ from culture to culture and person to person, however, making it very difficult to pin down in any general sense what a Buddhist actually is. For example, if we define a Buddhist as someone who meditates to realize Awakening, we are excluding most of the world's Buddhist from being classified as such, for meditation is not among the most common practices of the average Buddhist.

Even if we say that at the most essential level, to be Buddhist involves belief in the Buddha as the enlightened teacher of our age, which Buddha are we referring to - Shakyamuni, Amitabha, Vairochana, or some other embodiment of Nirvana? If we insist that the historical Buddha Shakyamuni is the only 'real' Buddha, then this not only discounts the small number of followers of Vairochana Buddha, but also the millions and millions of devotees of Amitabha Buddha, the most popular Enlightened One in the Far East. By this criteria, those that devote themselves to Amitabha and Vairochana are at risk of being seen as heretics, worshiping not false gods, but false Buddhas. Perhaps, if we see Buddha as that part of us all that is inherently enlightened, unlike these egos, then we may begin to find a way to describe all those people that consider themselves as Buddhists as being so. But then, every single being on this planet (and on any other planet for that matter) posseses an innate 'Buddha Nature', so in this sense we are all Buddhists, including Christians, Muslims, atheists, dogs, and mosquitoes!

Maybe it is in the way of life that we live that we might be considered Buddhist, for to live with mindfulness regarding body, speech, and mind is surely a basic foundation of being Buddhist. But then again, are the majority of potential Buddhists in the world actually living mindful lives, heedful of their actions, words, and thoughts? To some extent, any system of thought that encourages a moral outlook on life requires a minimal level of mindfulness to maintain such ethical standards, but there's a difference in being heedful of certain moral guidelines and being awake to minutiae of everything we do, which Buddhist mindfulness practice requires.

It's not only mindfulness that sums up a Buddhist way of life, however. Compassion and kindness are central elements to living in a way recognizably Buddhist in flavor. Insight without these finer emotions is an imperfect insight, and a life bereft of such qualities is surely one that is barely worthy of the description Buddhist. Compassion and kindness are not peculiar to Buddhism, however. Jews, Hindus, and probably aliens for that matter are equally capable of relating to the world in compassionate and kind ways as Buddhists. So, again, if we use these qualities as ways to define what it is to be Buddhist, we will end up classifying any decent human being as being so. But, then, perhaps this isn't so terrible...

This investigation into what it is to be Buddhist seems to be leading nowhere; but this isn't really so, for it keeps bringing us back to our basic humanity, to the ability at heart that we all have to develop generosity, morality, mindfulness, and wisdom. That these qualities are not solely associated with the label 'Buddhist' is not only obvious but also uplifting. In a nutshell, being Buddhist is being human. We are all, in some ways, 'Buddhist' whether we use such a title or not, and whether we attach to certain doctrines or not; equally,we are all innate Buddhas, waiting to explode our compassionate wisdom into the world at the appropriate moment. And that moment is always now. Being Buddhist is being Buddha, and here the teachings of that old Zen master Huang Po come to mind; all sentient beings are Buddha. As previously explored in Buddha Space, there is no 'us' and 'them' in being Buddhist, nor being Buddha, for that matter.

May All Beings Be Happy!

Since the essence of the Buddha's teaching is the Eightfold Path, I've always thought that a "Buddhist" was someone who actually walked that path.

By that, I mean someone who strives to live in an ethical manner and engages in a consistent meditation practice.

thanks for sharing being Buddhist article.. really wanna know..

The meditation and relaxation music reaches to unearth the bountiful beauty present in our beings. The panorama of the highest order brings the opportunity to allow love to embrace ourselves.Check out some free Meditation Music Samples at Gurumaa.com

The Buddha says that one must "do good, avoid evil and keep the mind pure." I think that covers all the other aspects of Buddhism.

I feel as if I am both Christian and Buddhist without really belonging fully to any organized church, though I feel connected to the teachings of Thich Nhat Hanh most.

And I am completely new at trying to understand what Buddhism is. I only really began to understand a little from reading books after my husband died.

Buddhism encourages moving in the direction of mindfulness, of compassion, of awareness of what is and what isn't, of joy, interconnectedness and equanimity.

Especially, for me, it encourages questioning and gives validity to our ever changing personal experience.

As the poet's apprentice said, the five precepts are a foundation.

Thanks for the comments, everyone.
Your references to the Five Precepts hit the nail on the head. Im unable to reply to every comment at the moment, but appreciate your views alot.