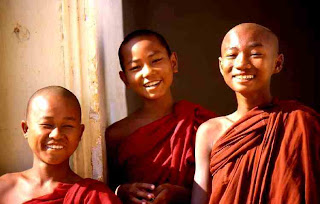 New Year is a time when we can reflect on the past twelve months, and make resolutions for the coming weeks. When we think back to the events of the previous year, it does us well to consider not only what happened to us, and what we did, but also how we thought, what our mind states were for the majority of the time. Were we skillful in the way we approached the world, or did greed, anger, and delusion color much of what we did? And, regarding our practice as Buddhists, did we keep the precepts well, did we meditate as often as we intended, and did we develop any wisdom? If we reflect wisely, we can see where our practice faltered, and therefore where we need to redouble our efforts over the next few months. And, here is where a New Year’s resolution can come in handy.

If our meditation practice has dropped off lately, we can make a commitment to a new discipline for the New Year, and if we’ve failed to live up to the way of life promoted in the Buddhist precepts, we can endeavor to fulfill them more readily in the near future. A simpler, but very effective, attitude to cultivate is openness. To be wide open for the world is a challenging but rewarding way to live this life, enabling us to let go of some of the egoistic elements that make us fall short of walking the Way with more purpose. Being open to the New Year and all that it will present to us seems both a wise & compassionate approach to things, and doesn’t involve much preparation or philosophical acumen. All we need is a bit of attention and simplicity.

All that we see, hear, taste, smell, touch, feel and think occurs in our awareness. This awareness isn’t me or you, it doesn’t have a name, and nor does it have an agenda to follow at the expense of others. It is the simple act of knowing in the present. And, if we associate with this knowing, rather than with the ego-personalities that we think we are, barriers start to fall. The barriers that separate me & you begin to crumble, and the barriers that separate this thought from that world start to dissolve also. The experience of duality is inherent in the notion of being a separate self, and to see that such a self is a delusion is to begin to let go of it. It isn’t always easy to do, and even less easy to sustain, but then the Buddhist teachings and practices exist to help in this process of letting go, so they can be employed in this task.

So, turn your attention around to that which is attentive: What does it look like? What does it sound like? Is it a thought or a feeling? The limits of the conditioned senses are where the unconditioned begins; a spacious awareness that contains all that is experienced. Simply by pointing a finger back at our ‘eyes’ right now, we can see this featureless knowing, and that because it is empty of self, it is full of the world instead. No separation, no conflict: Just the Buddha gazing at his own countenance. Surely, this is a New Year’s resolution worthy of a bit of effort, the right effort, to give our traversing of the a little push into the future. And, when we see that there’s no separation between you & me, him & her, us & them, this & that, then we may have the wisdom to recite with conviction:

May all beings have a Happy New Year!

Your third and fourth paragraph in this post are so clear and concise
that everyone who reads them has an undeniably simple,effective way to walk the path to awareness.