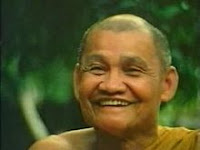 Ajahn Chah wasn’t just a great meditation teacher, although that’s what he’s most famous for throughout the world today; he was also a deeply wise man that could penetrate to the heart of a problem affecting one of his disciples at the drop of a hat. He could do this using both compassion and a biting humor that made clear to his recipient where their efforts should (or shouldn’t) be directed. An example of this direct teaching style is found in the following story: Ajahn Chah was once traveling in a car with several other monks, when he turned around to say something to a young American novice sat behind him. Another Western monk translated the master’s words, in which Ajahn Chah said that the young monk was thinking of his girlfriend back in the . The American novice was somewhat taken aback by the accuracy of his teacher’s words.

Next, the forest ajahn was translated as reassuring the novice not to worry, and that his problem could be sorted out. He was told that next time he wrote a letter, he should request that his girlfriend send him something personal to remind him of her. The novice, surprised by Ajahn Chah’s statement, asked if this was allowed for a Buddhist monk, and was assured that it was. The next words of Ajahn Chah took some time to be relayed, as the monk doing the translating required some time to stop laughing. If the novice monk wanted something personal to remind him of his love, he should ask her to send him a bottle of her shit! Then, every time that he missed her, he could open the bottle and take a deep sniff!!

This tale shows the brilliance of Ajahn Chah working on two levels. Firstly, it points out to the novice the ridiculousness of a celibate monk hankering for the love of a woman. Secondly, it indicates the essential nature of the human form that inspires such romantic and lustful feelings; it’s made up of some pretty awful things that are anything but attractive or arousing. Not for most folk, anyhow!

The above story is paraphrased from an anecdote retold by Ajahn Brahm in his wonderful book ‘Who Ordered This Truckload of Dung?’ It’s published by Wisdom Publications, and well worth a read.

The above post first appeared on the blog 'Forest Wisdom,' which was reborn as this one.
Posted by G at 9:50 AM

hahahaha...
I fu see from an outsiders Perspective that was quite funny but from the Lover's Perspective it would have hurt :-(

Perhaps with time & insight the "lover" saw the funny side of it, too, Buddha. :-)